***THERE WILL BE SPOILERS FOR OITNB AND GLOW***

The month kicked off with the long-awaited, cliffhanger-resolving fifth season of ORANGE IS THE NEW BLACK, and concluded with the debut of the fantastic new show about 80s women’s wrestling in L.A., GLOW. What did two of the greatest seasons of TV this year so far have in common, apart from absolutely kick-ass female ensemble casts? Executive producer/showrunner Jenji Kohan.

OITNB ended on a mother of a cliffhanger last year, with a frantic, uncertain Daya aiming Humphrey’s gun at his head.

Kohan and her writers made a bold and brilliant choice for this new season: the show picked up at that exact moment, and the entire season took place over three days. This gave the show a freshness and immediacy that kept adrenaline and interest levels skyrocketing as we followed the evolution of the riot. It allowed for some seriously deep dives into all of the characters. We also got whole new levels to relationships, some unlikely bonds, and even a marriage proposal. The danger and threat level remained absolute throughout, although the show still managed to weave in its signature laughs and sadness. Taystee in particular got some insanely powerful moments, proving that Danielle Brooks is the MVP not just of this show, but also TV, acting, and life. No doubt.

The end result was that the writing was tighter, more precise; the characters more nuanced; the actors had more freedom and opportunity to truly go there with their performances. It was a thrilling and emotionally exhausting ride, the best season of the show yet, which closed with the best episode (with the best use of music in the show to date), and, yes, an even bigger cliffhanger than last year.

What a start to the month for Kohan.

But she wasn’t done. Nope. Not even close, baby! Because one awesome and extraordinary cast of magnificent women per month just isn’t enough. Enter, GLOW.

Created by Liz Flahive and Carly Mensch (playwrights who between them have worked on Nurse Jackie, Homeland and OITNB), this is a modern take on the 80s cult classic show of the same name (Gorgeous Ladies Of Wrestling), albeit one still beautifully grounded in its gritty 80s setting. It’s still colorful, but it’s the dirty underside of the day-glo. The sets are grimy and unglamorous, the performances are grounded and nuanced, and the song choices for the soundtrack are always a zig where you expect a zag—no one could have foreseen that one of the best moments of the series would be set to a song from the original Transformers cartoon movie, “Dare” by Stan Bush (and Rocky IV training montage composer Vince DiCola for maximum 80s!).

The show foregrounds the desperation, neediness, hurt, and all the other messy emotions of its protagonists. It’s real, in other words. Painfully so, sometimes, and that’s one of the keys to why it works so damn well. The writers on this show—including Rachel Shukart, Nick Jones and Sascha Rothchild—do an expert job of contrasting the moments of emotional sweetness and uplift with the exposed wiring of the human heart (not literally, this isn’t GAME OF THRONES).

One of the main reasons for GLOW’s awesomeness, though, is its glorious cast of incredible actresses. This is a show that is not afraid to foreground its women and take ferocious aim at the gender discrepancy in Hollywood (and, like, the world). The show focuses on struggling actress Ruth, who is played to revelatory perfection by the always great but never better Alison Brie in what is, inexplicably, her first real leading role. Hopefully this pushes her into the acting stratosphere she deserves—incredibly, she had to audition multiple times for what should’ve been the easiest casting decision of all time (yes yes, I know casting is a truly complicated puzzle in many dimensions that needs to be completed *exactly* right or the whole thing falls apart… I absolutely know this… but c’mon… it’s Ali Brie!)…

GLOW opens with Brie’s Ruth giving her all in an audition for a female role that is nothing compared to the male role. This sets the tone perfectly: These women have a struggle on their hands. They have to fight, and fight hard, for something that is only in the vicinity of what they really want. Ruth is a great character to drive a show like this. Her neediness and desperation and unflinching desire to transcend her circumstances are powerful engines that keep the story rolling.

Brie’s performance is fearless and unflinching. But this isn’t a one-woman show. There are fourteen amazing women on screen, and any one of them could be the lead, because the writers have made each of them so fully grounded and realized, and because the performances are all so vulnerable and magnetic and empathetic and funny and raw. I could write an essay on each of them, but suffice it to say, they all get arcs and standout moments, and every single actress here KILLS IT AT ALL TIMES.

The combination of breathtaking performances and killer writing forms a shield against conventional wisdom and stereotypes. Very early on, we find out that Ruth has slept with her best friend’s husband. Most shows would label her the villain and give her the one dimensionality of a selfish ‘slut’. And she wouldn’t be a leading character in those shows. Instead, GLOW artfully reveals the emotional complexity at play, and keeps Ruth highly relatable. In short, they do what seems to be so hard for many shows (and movies): they make her a complex person. They also give her an equally complex nemesis in the form of her former best friend, Debbie, AKA Liberty Belle. Betty Gilpin gives an affecting and powerhouse performance that provides a searing counterpart to Brie’s drifting Ruth. 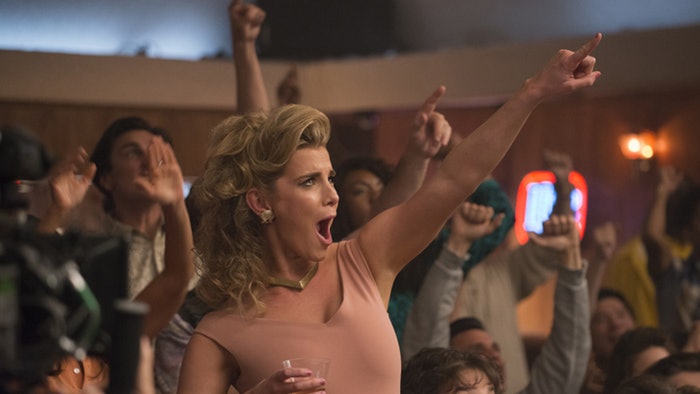 Gilpin, owning it as Debbie

There are men of course, most primary of which are WTF podcaster Marc Maron, and former Veronica Mars star (Team Piz!) Chris Lowell. Maron excels as the seedy yet principled, abrasive yet vulnerable director of the show within the show, and Lowell delivers comedy gold as the moneyed producer of the whole thing. Both stand out, which is impressive considering they are surrounded by fourteen of the finest actresses on TV right now. 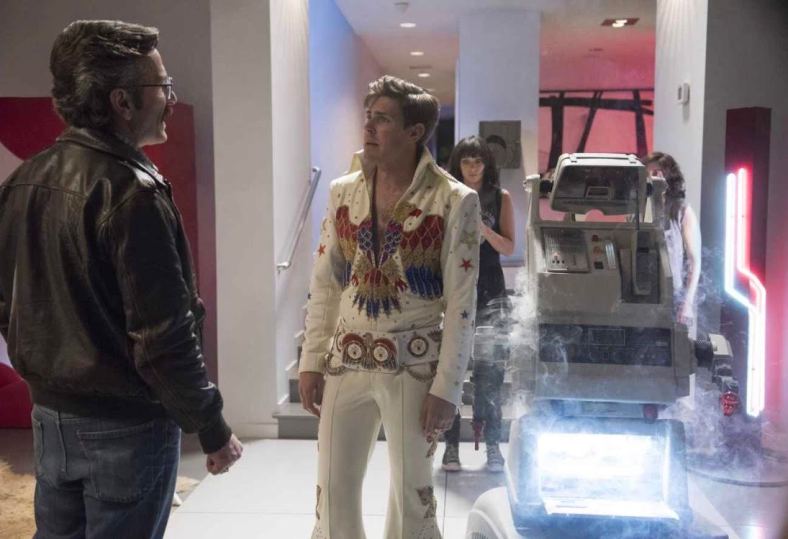 In short, GLOW is perfect, we need season 2, and we must bow down to Kohan and her writing teams for bringing forth two such complex and mighty female ensemble shows, in the same month, no less.

Let’s be honest: The world needs more powerhouse female ensembles, both in TV shows & movies, and in front of & behind the camera. They’re good for everyone: Great actresses want to work with other great actresses, we all want to watch amazing performances and extraordinary characters and relationships, and TV outlets need the immense ratings that ensue. Everyone wins.

One thought on “The GLOW of ORANGE IS THE NEW BLACK: Why Jenji Kohan just had her best TV month ever”