10 Cloverfield Lane was the movie no one was expecting. 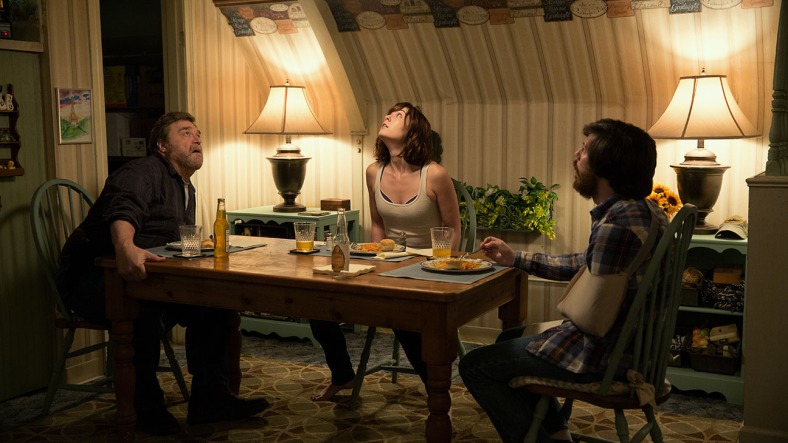 Shot under the codename Valencia back in 2014, it had vanished from the radar during its lengthy post-production. Then early in 2016, a trailer dropped out of nowhere. Only the title of the movie was not Valencia anymore.

Thrillingly and mysteriously, it was now 10 Cloverfield Lane. Producer J.J. Abrams had done it again, repeating the trick he pulled off back in 2008 when he released the trailer to Cloverfield; a trailer to a movie no one knew was even being made.

The frisson from the name recognition got 10 Cloverfield Lane instant buzz and anticipation, as did the set-up in the trailer: Mary Elizabeth Winstead’s character appeared to be some kind of hostage (maybe), kept captive in a bunker (maybe) by John Goodman, whose warnings of something terrible up on the surface might or might not be real.

Here are 10 reasons why.

MARY ELIZABETH WINSTEAD: As Michelle, Winstead is absolutely perfect, on every level, giving a transcendent performance. The opening of the movie has no dialogue; Winstead wordlessly communicates a character, a life, a terrible decision, dealing with that decision, and a journey. And that’s all before the titles. (We’ll get to those titles in a minute).

From the time she wakes up in the bunker through to the ending of the movie, we utterly feel her terror, uncertainty, rawness and power. It’s a visceral performance, hovering equally over hysteria, despair and horror. It’s stellar, emotional work from Winstead. A new career high (in a career full of career highs).

JOHN GOODMAN: We’ve seen him be scary before, sure, but not like this. Here, he’s a monumental, hulking, terrifying presence, quivering that high-wire tightrope between violence, stillness, menace, kindness and compassion.

Thanks to Goodman’s electrifying performance as the perpetually dismissed survivalist Howard, whether he’s trustworthy or not hangs in an unsettling balance over a yawning abyss.

JOHN GALLAGHER, JR: While 10 Cloverfield Lane often plays like a Goodman-Winstead two-hander, Gallagher Jr as Emmett is a crucial part of the proceedings. He brings the charm but also the possible unreliability of the unknown. He may be an innocent guest, he may be working with Goodman, he may have another agenda entirely. 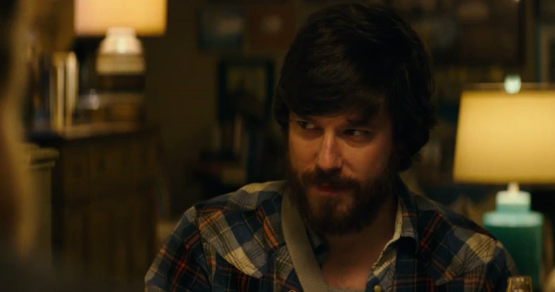 Gallagher Jr plays those notes perfectly while also making us like him and even, possibly, trust him. It’s a hard role to make an impact in, given the slow burning acting fireworks going on around him, but Gallagher Jr shines brightly, bringing just the right amount of scuzzy likability to his wildcard character.

DAN TRACHTENBERG: Although Trachtenberg cut his teeth on two shorts in particular that gained a lot of attention (Portal: No Escape and More Than You Can Chew), this is his first feature, and boy, did he knock it out of the park. 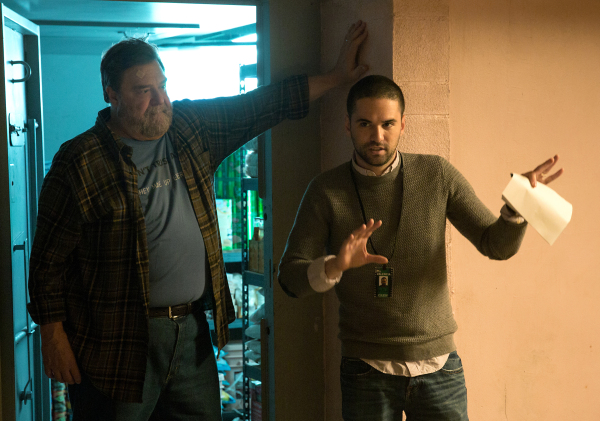 It’s an extraordinarily accomplished debut from the Temple graduate and Philly native (yes, there are Tastykakes on the kitchen set). His grip on the material and the tone is rock solid throughout. The movie is visually sophisticated, stylish in the most restrained, necessary of ways. He shoots that wordless opening beautifully, and then slams us off the road with the shocking, brilliant titles, interwoven with scenes of a car crash that erupts into sound and violence, cuts out, roars back — it’s disconcerting, throws you off balance with style and verve, and puts us in the same emotional place as Winstead when she opens her eyes in the bunker for the first time. Trachtenberg then delivers unbearable suspense by the visually stunning truckload, and by the time the movie reaches its outstanding conclusion, he truly cuts loose, opening things up in a way that is best appreciated in IMAX. A fantastic, powerful debut.

THE ORIGINAL WRITERS: Although several writers worked on this movie, we gotta give credit to where this all started — an indie script called The Cellar, written by Josh Campbell and Matthew Stucken. This got the attention of Paramount, who handed it to J.J. Abrams’ production company Bad Robot to develop. Without this script, which told the story of three people in a cellar, not all of whom were trustworthy, while some unknown catastrophe raged overhead (possibly), was the heart of the project. Without Campbell and Stucken’s brilliant inspiration and ideas, 10 Cloverfield Lane wouldn’t exist.

THE REWRITERS: Whiplash writer-director Damien Chazelle was brought in to rewrite The Cellar, changing key character dynamics and scenes throughout, and adding the gonzo ending (more on that later). You can see the connective tissue between this and Whiplash: both are tight, taut character pieces with hulking, possibly untrustworthy authority figures, and more naive central characters who discover a world much bigger than the one they thought they knew. Chazelle was actually slated to direct 10 Cloverfield Lane, but Whiplash was greenlit, calling him away and allowing Trachtenberg to step in. During shooting, Daniel Casey was the writer on set, tweaking scenes, adding new ones, making any necessary changes. And Gennifer Hudson, currently adapting Victoria Aveyard’s dark YA fantasy Red Queen for director Elizabeth Banks, also contributed at least one crucial scene for Michelle. Oftentimes, multiple writers are seen to be a bad sign, but movies are always a collaboration on every level, and on this project, each writer, from the originals through to the rewriters, helped contribute to making this movie so damn perfect. The end product feels seamless and assured.

SOUND DESIGN: Robbie Stambler, Will Files, Lindsey Alvarez and the rest of the sound team deserve Oscars for the stellar work they put into this movie. Sound design is always important, giving movies an invisible depth, but for 10 Cloverfield Lane, sound design is critical. It’s absolutely part of the story, deeply integrated with the narrative. We don’t know what to believe about John Goodman’s character and the things he says are happening on the surface above them, and the sound design adds to the deeply unsettling sense of weirdness and WTF that drives the story. Sound design is 100% another character in this movie. Here’s an interview with Files about his work on the movie.

J.J. ABRAMS: The Star Trek and Star Wars-rebooting main man. Via his company Bad Robot, he had the vision to take The Cellar and turn it into Valencia, and then 10 Cloverfield Lane — this not only boosted the movie’s visibility, but gave it the extra dimensions that make it such a brilliant piece of pop culture. 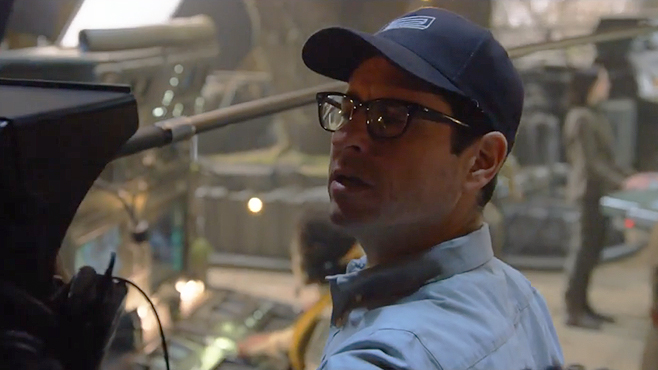 And as Trachtenberg tells it, Abrams, unsurprisingly, had endless genius creative suggestions, like the stylized credits, how to shoot the car crash, Winstead’s “oh come on” line (I won’t tell you how or when she says it, but trust me, it’s genius), and other things about the ending that I won’t spoil. He basically sprinkled the movie with that J.J. movie DNA — another crucial part of the tapestry, and further proof of the beautiful power of collaboration. (This movie would make a brilliant double bill with Super 8).

BEAR MCCREARY: Damn, son. Melancholy, otherworldly, beautiful, creepy, ominous, terrifying, intimate, epic… McCreary’s essential soundtrack is all these things and more, weaving in and out of the sound design to give this movie an unsettling and cinematic extra dimension throughout. Originally the score was going to be more minimalist and restrained, but it was another of Abrams’ ideas to give it a huge score to elevate it. Of course, he was right. McCreary is a fantastic composer: this score is one of his absolute best pieces of work.

DAT ENDING THO:  I absolutely can’t say what it is — there’ll be no spoilers here — but it’s bonkers and brilliant, perfect, epic, intimate, and creates a great movie-long character arc for Winstead to play. It’s cathartic, thrilling cinema. It’s magnificent.

So there you have it. 10 huge reasons to try to catch 10 Cloverfield Lane while it’s still in some theaters, or to buy it as soon as it comes out to own. Pre-Captain America: Civil War, it’s the first contender for movie of the year. It’s that good.