One way or another, it’s safe to say that Ray Bradbury’s stories shaped my childhood.

The first time it happened, I was four, and it was the stolen pleasure of sneaking downstairs late at night, unable to sleep, and creeping into the armchair in the living room while the grownups watched The Beast From 20,000 Fathoms on TV. They knew I was there; I knew they knew; but it was okay. A secret compact between us: just this once. The beast roared its way in 40s black-and-white Harryhausen stop-motion from the Arctic wastes to the towers of New York City, and the skeletal shapes of the Coney Island rollercoasters. Even as a kid, the creature’s terrible loneliness and confusion and terror were clear, and overwhelming.

That was Bradbury’s gift: the lonely heart that beats through all of us, human and monster. 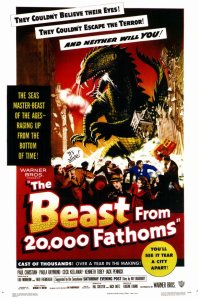 The Beast From 20,000 Fathoms was the original title of Bradbury’s extraordinary short story, The Fog Horn. When Warner Bros., who were already developing a story about a sea monster rising from the depths, optioned the story and the 20,000 Fathoms title, Bradbury changed his title, keen to differentiate the story from the movie.

In the original story, a lonely sea monster is called up from the depths by the sound of a lighthouse fog horn, mistaking it for the cries of its own kind. It had lived for centuries alone, the only one. The sound of the fog horn gave it hope that it might no longer be lonely. When the creature discovers that it will in fact continue to be alone forever, it’s a haunting, crushing moment, one that consumed the seven-year-old me. 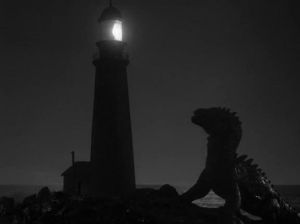 Loneliness of the long distance monster

Through the movie and the short story, Bradbury opened my mind to the raw emotional potential and power of story; the way an emotional moment can be  a devastating engine for storytelling. Brilliance of concept was not enough; every story must have a heart that beats through it, and through you, the reader. You need to feel its heart pounding in the race of your own pulse. Bradbury’s genius was in refracting these moments through awesomely pulpy genre material. These two works were key in my own evolution as a storyteller. My love of heart and of genre as a reader and a writer has its roots in Bradbury’s beautiful, lonely visions.

Powerful, heady stuff for a young mind; many years later, it still reverberates, hypnotizes, and inspires. Bradbury was unique, and I owe him a debt of gratitude for being a great teacher, and an incredible visionary and writer.

One thought on “Ray Bradbury: The Fog Horn and The Beast From 20,000 Fathoms”