Since its pilot first aired last year, Arrow has transcended its case of the week set-up, morphing radically in the manner of a previously regular citizen becoming a fully fledged superhero (see what I did there?). The pilot was a sure-footed, highly confident piece of TV drama, loosing its arrow and hitting with breathless precision the massively hard-to-hit target that is the perfect combination of dark, gritty, pulpy, pleasurably comic book-y, hyper-stylized, charismatic, compelling, funny, kinetic, and thrilling. And it’s only gotten better.

The Hood, the Huntress and the cop; tragic denouement not pictured

All the elements were there from the start: the hint of mythology (what really happened on that island?), the thrills and the action, the CW glossy / pleasing to the eye / highly entertaining veneer, the uniquely sharp and intelligent visual style. In the early episodes the show leaned on a case of the week structure (Oliver Queen’s father’s notebook of names) more than anything else, which did raise some concerns of repetition and longevity. It was obvious the show contained much more than that, was meant to be much more than that.

Fortunately, exec producers Marc Guggenheim, Greg Berlanti and Andrew Kreisberg did a tremendous job of elevating the show rapidly beyond the original format into something harder, faster, more resonant, more powerful, more gripping; into a show that could easily last multiple seasons. They opened up the mythology, burned through story more quickly and thrillingly, and, crucially, started bringing more characters into the bat cave, as it were (hey, it’s a DC-based analogy, so it’s OK). First in was John Diggle (David Ramsey), creating a great buddy comedy pairing, which has proven to be an enduring relationship that sparks much gripping, compelling conflict between him and Stephen Amell’s Oliver. Several episodes later, the producers made the genius move of bringing in Felicity Smoak, played by Emily Bett Rickards. Her absolute ease with a snarky one-liner proved a perfect match for the show’s aesthetic; the episode that brought her into the Hood’s world (The Odyssey) was one of the best of the season. Rickards doubled down on her promotion and showed just why she needs as much screen time as the writers can give her, with an excellent performance in the subsequent episode, Dodger.

Felicity Smoak in mortal danger. Spoiler: she makes it.

The overarching conspiracy (the Undertaking, brilliantly led by John “Captain Jack” Barrowman, AKA the Dark Archer) is gathering momentum, future Hood sidekick Speedy, currently known as Roy and played by Colton Haynes, has been successfully introduced in a manner that can only be described as,well, speedy, and Oliver has a now well-established nemesis in the Huntress, played with astonishing verve and electricity by Jessica De Gouw.

Which brings us to the most recent episode, The Huntress Returns.

It was a fantastic example of everything that’s great about the show: deep, resonant relationships that leap off the screen and grab you, making you feel them; mind-bogglingly original and intense action sequences that race past you; and a gloriously geeky joy in the dark angles of its comic book origins. It had zingy one-liners to spare, clashing relationships with ultimately high stakes, secrets, heartbreak, and a pulse-quickening chemistry between its core cast.

The always excellent Willa Holland, the sharply wonderful Katie Cassidy, and the ever-essential Colin Donnell. And a shitload of lens flares (Jimmy Muro would be proud!)

Guy Bee did a phenomenal job directing it. He’s one of the greatest directors working in TV today, having directed some of the best episodes ever of SouthLAnd, Supernatural, Revolution, The Secret Circle, The Nine Lives Of Chloe King, Kyle XY, Terminator: The Sarah Connor Chronicles, and many, many others. He has an unerring eye for this kind of gritty, thrilling “YA” genre TV (which is one reason why I think he’d be perfect to direct an adaptation of Altered). His true skill lies in blending a soulful, character-based approach with an extraordinarily intelligent visual eye for the depth of a shot. The visual architecture in his shots is remarkable, while always serving the characters in a scene.

Look at the incredible architecture in the composition of this shot; a lesser director would be close on the two characters; Mr. Bee shoots it Nolan-style, with the surroundings as character, bringing Starling City to life

And he shoots the shit out of Arrow‘s fast-paced, adrenalized action sequences, bringing an extra level of style. With that combination of visual structure and futuristic style in urban situations, he’s like the Michael Mann of TV, in the most original way.

He’s one of the show’s key creative forces, so he was well placed to bring us the tragic return of Oliver’s intense, possibly unhinged, nemesis, who may also be the love (or at least lust) of his life. It was a dangerous episode, with more than a hint of SouthLAnd‘s constant state of “unknown trouble” lurking in every scene; you knew bad shit was going to go down, you just didn’t know when or how.

Jessica De Gouw was magnificent as the Huntress, clearly relishing every second of her time on screen, fully occupying the wounded heart (and consequent vengeful fury) of her character. 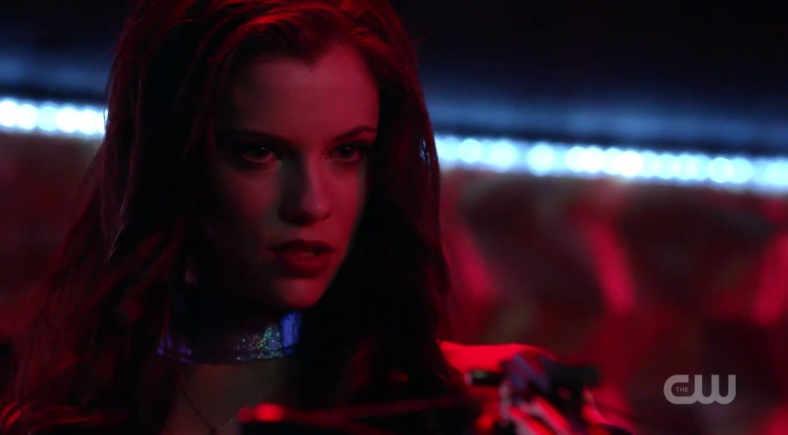 Jessica De Gouw as the Huntress: in this life or the next, she will have her vengeance

She held her own throughout, bringing a furious energy to her scenes with Amell; they are truly a heartbreaking couple, in their own way. Her revenge was brutal; and the scenes between Amell and Janina Gavankar (playing Queen’s current girlfriend/a cop who is hunting down the Hood) were beautifully played out by the pair of them.

Arrow is a show that, like Person Of Interest, is an outstanding genre show that has easily overhauled its case of the week structure and steadily infused it with gripping and compelling mythology. Both these shows have far outstripped their beginnings, while also retaining the ability to manipulate and return to more focused episodes when necessary. Arrow‘s momentum is increasing exponentially; its levels of excitement are following suit.

Just watch it. Or the Hood will put you on his list.