Nothing will ever be the same.

The beginning of the end

As season five drew to its genuinely shocking close, the dread that had been building throughout the episode — throughout the season — exploded. It has been the season of John Cooper, played with certified Emmy magnificence to the end by Michael Cudlitz. In effect, he shouldered the entire season like a modern day Atlas, and it was on his tired, weary face that the existential pain of being alive was etched in ever deeper lines as the episodes rolled by. In Reckoning, his agony became complete.

This episode was, without a doubt, SouthLAnd‘s finest moment.

It was expertly scripted by the extraordinarily intelligent Jonathan Lisco, the former lawyer/NYPD Blue writer who has found his true calling with this show. In person, he’s an erudite, precise conversationalist; his scripts feel that way too. The language is honed with the highest skill; whether it’s violent interchanges or quiet interludes, jokes or grief, if you look at his scripts line by line, they are masterpieces of elegance and seamless construction. Nothing is wasted; nothing is uneven. Everything, as Thom Yorke once sang, in its right place.

Reckoning was the best Lisco script yet (despite its lack of Nicki Minaj references). He gave us the final stage of Cooper’s descent into hell, knocking away each and every crutch and support one by one, until the final, most devastating blow of all: Laurie didn’t want to have children with him anymore. The episode was peppered with references to Cooper eating a gun, losing it, disintegrating: in classical Greek style the tragedy wended its way ever closer. Darkness loomed. We just didn’t know how or when it would come.

Even as Lisco was laying down Cooper’s trajectory, he was giving us beautiful (in the mathematical sense as well as the emotional) resolutions to the other two components of SouthLAnd‘s character triptych: Sherman/Bryant, and Adams.

Lydia’s resolution was a nice grace note amidst the darkness: the ever-rumpled Tom Everett Scott returned as Russell Clarke in the last few episodes, and seeing the two of them find their way to a tentative, possible happy ending has been an unexpected pleasure, and yes, in that final, beautifully shot scene on the beach, heartwarming. This is not an adjective I’ve ever used in five seasons of writing about this show, but, of course, they fully earned it, playing out the scene just right, just so. It was a lovely payoff to a relationship that we’ve been feeling and possibly hoping for since the pilot. Regina King and Scott were perfect, and their natural chemistry just flowed. 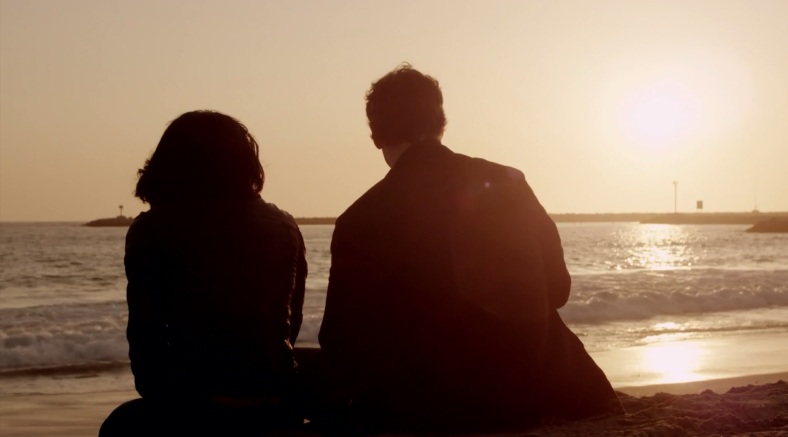 A rare moment of peace and beauty

Heartwarming resolutions were in short supply in the other major arc.

The Sammy vs. Ben showdown has been played out so well throughout the season. Ben crossed the line last season in God’s Work, Risk and Thursday. That gave the writers a great platform from which to just f**K with the Ben and Sammy dynamic in season five, and they did a tremendous job with the story they chose: Ben’s complete amorality allowing him to believe that having Chris break into Sammy’s house and tag it with gang signs while stealing the tape was a genuinely okay thing to do.

Can of whup-ass that’s about to be opened: not pictured.

When it came, the storm broke in spectacular fashion. Sammy finally worked it out, and confronted Ben in a tense, fraught, emotional and heartbreaking scene outside the hospital, which ended with a hyper-intense all-out brawl between the two of them. “We were partners,” Ben yells. “That’s right,” spits Sammy. “Were.” And he walks away.

The terse economy of Lisco’s script gave Ben McKenzie and Shawn Hatosy their finest, most accomplished performances of the show to date, in all five seasons. 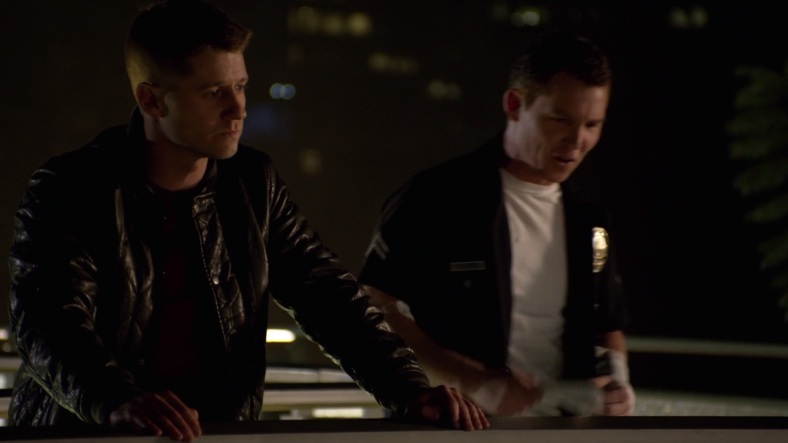 The betrayal of trust between these two men who should be brothers, having each other’s back, was devastating. McKenzie was so controlled, giving us Ben’s collapsing emotional world within an intense, desperately holding on performance. Hatosy brought the De Niro/Penn intensity, letting it twist his features as it steadily boiled up from within until he was consumed with heartbreak and rage. Their acting was like f**king opera, man. I bow down to the pair of them: they are two of the finest actors working today. Absolutely extraordinary. That clanging sound you hear is me dropping names: when I hung out with them last year in LA, they were completely relaxed, genial, down to earth, but completely passionate about this show. They transformed their souls for these performances; turned themselves inside out in the way that only truly great actors who trust the material and their director can do.

He grew up in the shadow of Dodger’s stadium; he knows Los Angeles like few others. Listening to him talk about shooting on the streets of LA is fascinating. It’s no coincidence that SouthLAnd has been the only show on television to, amongst all its other achievements, give us the true fabric of this great city.

No one shoots LA like Chulack with DP Jimmy Muro at his side. No one. He’s one of my favorite directors, and I am including movie directors on that list. He shoots unflinchingly, architecturally, fluidly, sharply; in the edit, he cuts the episode deep, down to the bone.

Chulack has directed some of the best episodes of TV drama; so when I say this was a career best for him, please see it in that context. It really was a phenomenally directed episode. It layered in the three arcs (tragedy, showdown and possibility), dovetailing them tightly in a way that rushed us forward before we were ready. Because we were never really ready; none of us wanted this thing to end. But it powered its way through the shortest seeming hour in history, even with those extra two minutes.

And it had to end.

None of us were ready for how.

Cooper’s hellish horror-scape of a season reached a terrible peak in Chaos, as he watched Lucero get executed while they were cuffed together. All Cooper had left was the hope of a child. And Lisco (and the writers room) took that away in Reckoning. They took it all away. They stripped down Cooper’s emotional machinery until he was a wreck of car with no wheels, axles propped up by bricks. He had nothing left. The signs all seemed to point to suicide, and the writers really played this one out in the most close to the line way they could. It seems inconceivable that Cooper didn’t know what he was doing when he refused to throw the gun away in that final scene, instead swaying up to his feet, gun waving. How could he not know they would shoot him? We’ve seen it mentioned before, suicide by cop: wave a gun and wait for them to fire. But… but… he was in the killing rage, red mist clouding everything: sound and visuals were hazy, slowed down, disorientating. Maybe he was on his way to putting his hands up in the air. 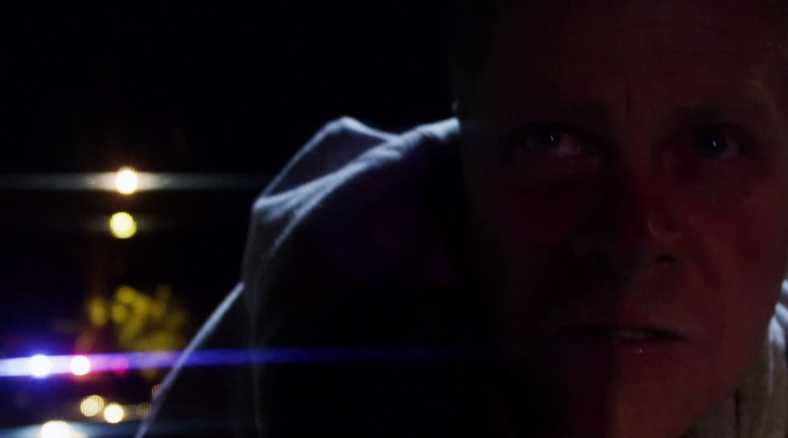 A decision is about to be made…

We may never know. That’s the beauty of SouthLAnd.

Instead, (depending on how this cliffhanger plays out) we might just be left with the memory of Cooper, an extraordinary cop, played in the most grounded, compassionate way by Cudlitz. Has anyone ever done more to earn an Emmy? I don’t think so. Cudlitz has proven himself to be the soul of the show this season, the guardian of all that it stands for. To see his portrayal of Cooper’s helpless descent into loneliness, depression, hopelessness, and then, finally, the heart-rending breakdown of his command presence; it’s been revelatory acting. I’m going to miss Cooper.

There may be no more “hey numbnuts.”

Cudlitz did groundbreaking work this season: Emmy better reward him.

This is a possible eulogy for Cooper (those were pretty serious gunshot wounds, but to quote Rob Thomas, there’s dead, and then there’s TV dead). He was one of TV’s most iconic, epic characters. One of TV’s most essential characters. But I don’t want this to be a eulogy for the show; I fully believe it will come back for a sixth season, if not on TNT, maybe on another network like FX or AMC.

I don’t want this show to go.

It means a huge amount to me. I’m not exaggerating — not even a bit — when I say it’s changed my life. It was the spark and the ignition for my TV scriptwriting. It showed me how to write TV scripts; how to tell stories in the most real and most stripped back way; how to create characters that live and breathe and are real. It’s taught me so much, and everything I’ve learned from writing scripts has deeply influenced the way I write my novels. Now everything I write is, I hope, SouthLAnd-style; it’s the standard I aim for, even if I don’t always get there, it gets me further than I would have otherwise. It’s led me to Los Angeles; to meetings with film companies; to an extraordinary hour and a half sitting at a bar having a brilliant conversation with Cheo Coker and Cudlitz. It’s given me amazing experiences. It’s brought me friends (Deb, Bill, Lisa and others).

From the opening shot of the pilot I was hooked; by the time they played the National’s Fake Empire in the final scenes, I was in love with the show. It’s only gotten more intense.

I’ve never been so emotionally attached to a show; so, no, I don’t want it to end. None of us do.

All we can do is let TNT know, keep sending the message.

And keep praying that for SouthLAnd, this isn’t end of watch.

7 thoughts on “SouthLAnd’s day of Reckoning”