I’ve watched a lot of television the last few days, and one thing has become abundantly clear: with a pair of standout turns in Gotham and Shameless, Cameron Monaghan owned TV this week.

Like I said, Cameron Monaghan, owning TV this week

I’ll start with Gotham, in which Monaghan took on the iconic role of the Joker. It was a star-making turn in a show that has become essential viewing. In just 16 episodes, Gotham has carved out an iconic spot in the TV schedule. Full to bursting with grittily memorable performances, with Ben McKenzie’s beleaguered crusader for justice Jim Gordon and Robin Lord Taylor’s beautifully off-kilter Penguin leading the pack (“hello, old friend”), the show has a rock-solid grip on its world.

Gordon and Penguin face off… face… off…

Gotham is a perpetually cloudy, ominous, dirty, baroque version of itself, like an L.S. Lowry steel mill nightmare, peopled with lowlifes and hoodlums, iconic freaks, and lost souls. It’s dark, uneasy, but it’s shot through with a rough, raucous humor, a wild and wide-eyed glee in its strangeness. The show takes a particular kind of comic book sensibility and runs with it; it’s a fractured, monstrous reality that feels 100% grounded.

It’s also, of course, the home to the future Batman, Catwoman, Poison Ivy, the Riddler… Chief amongst these, of course, is the young Bruce Wayne, and the show has done a fantastic job showing us his slow, steady journey towards becoming the Batman. It does make you kind of wish for a spin-off teen Batman and Catwoman show, since David Mazouz and Camren Bicondova have been consistently fascinating as their younger versions. The producers have said that the show ends when Batman first puts on his suit, which is on one hand a shame, but on another, completely understandable, since Gotham is Jim Gordon’s show, and Ben McKenzie delivers raw, fearless, intense, hilarious and gripping performances week after week.

This week’s episode, “The Blind Fortune Teller,” took on the circus, which allowed the show to dive even deeper into its beautiful weirdness. This circus is run by the Lloyds and — future sidekick alert — the Graysons, two families at war. McKenzie’s Gordon is on an awkward date at the circus with Morena Baccarin’s Dr. Leslie Thompkins, when a fight breaks out in the middle of the show… a fight which ends with the discovery of a body: the snake lady has been murdered, and her son, played by Monaghan, is distraught.

Or so it seemed. Monaghan brought the kind of sensitivity we’ve seen from him in Shameless, at least to start with, as he played the lonely, upset son struggling with his mother’s death. Gordon didn’t buy it though, and in a you-can’t-handle-the-truth showdown in an interview room, Monaghan revealed his character’s true self in an absolutely brilliant and unforgettable 3 minutes of television. We saw flickers of the future Joker rippling across his face as he danced between madness, sadness and psychosis, often in the same beat. And then there was that laugh. Chills. In just a few beats, Monaghan gave an extraordinary, indelible performance that would have been the most iconic moment of the TV week… if Monaghan hadn’t already claimed that title the night before.

Because he also plays Ian in Shameless, a gay teen who has been struggling with bipolar disorder for most of this season. In “Crazy Love,” Ian kidnapped his boyfriend Mickey’s baby and went on a terrifying 18 hour joyride while his friends and family slowly disintegrated with worry and fear. It was a bravura, revelatory performance, culminating in some jaw-droppingly heartbreaking work as Ian finally gets checked in to a mental institution. He played the fear, the overwhelming sadness, the almost total inability to process what was happening, in the most understated of ways.

“Crazy Love” was written by John Wells, himself one of the most iconic figures in TV today, the creative force behind E.R., The West Wing, Third Watch… and of course, SouthLAnd and Shameless, which made the Gordon-Joker face-off something of a SouthLAnd-Shameless mash-up, since McKenzie played Ben Sherman on 5 seasons of the always amazing and canceled-WAY-too-soon SouthLAnd.

Moment of silence for that show. 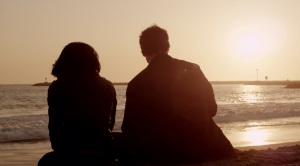 We miss you, SouthLAnd

So in this week’s Shameless, Wells did what he does best: create visual and emotional moments of pure television. He did the heavy lifting at the start of the episode (although he’s a brilliant writer, so it seemed effortless), so that by the end, we were coasting on pure emotion, and it was all down to the actors to play the heartbreak. And play it they did.

I want to take a second here to call out Noel Fisher, who has been one of the most underrated but consistently excellent actors on this show. He plays Mickey, the most-feared motherf**ker on the South Side, who is also Ian’s boyfriend. Fisher has been brilliant throughout, conveying the constant struggle as Mickey fights to maintain his rep while also trying to actually be happy. In “Crazy Love,” Fisher showed Mickey coming apart at the f**king seams. His moments in the car ride back from finding Ian, where he realizes that Ian has to be committed, and in the institution at the end, were genuinely astonishing.

But ultimately, the show was really Monaghan’s, as was Gotham. He owned them both with connected, naturalistic, grounded and heartfelt work, and with these back-to-back performances of troubled, unstable characters, Monaghan has surely put himself on the Emmy map.

Gotham is going from strength to strength with dizzying speed, and Shameless is in the midst of one of its best seasons to date.