As regular viewers (and if you’re not, start now), you all know that SouthLAnd sets an extraordinarily high bar with every episode.

No other show is constructed and executed as tightly, precisely and brutally as this one. The scripts are taut, ferocious, bulletproof. The whole scriptwriting tenet of “get into the scene as late as possible and get out as soon as you can” is taken to a whole other level by the SouthLAnd writers’ room. They elevate that beyond being an artform; it’s writing like a martial art, where the slightest movement can result in you being slammed to the ground emotionally, winded, breathless. You can find yourself feeling sad without even knowing why, because they just pulled some of that ninja shit on you.

Point being, when I say that Zack Whedon’s script raised the bar again, I’m really saying something. It’s not easy for a new writer to the room to do that. It’s a testament to SouthLAnd‘s writer selection process that Whedon is the second scribe this season (after Aron Rahsaan Thomas) to ace their debut script.

Sure, he comes from Hollywood writing royalty. A veritable dynasty, if you will. You all know about his brother Joss (Buffy, Angel, Firefly, Avengers to name just a few), their father, their grandfather. Another of the brothers, Jed, has been working with Joss for years, and has a major production role in the new S.H.I.E.L.D. pilot (which ABC needs to order to series like, now). Of course, that doesn’t guarantee that Zack would be able to knock it out the park; but the fact that he did, spectacularly so, isn’t entirely surprising.

One area which the show hasn’t quite been hitting the target this season has been the opening few minutes leading into the freeze/photo flash voiceover. They’ve lacked a certain oomph in season five, for the most part, compared to previous seasons. Zack changed all that, giving us just a brief glimpse of an off duty Sammy creeping up on an unseen perp screaming and firing a handgun at civilians. Staying off-duty is “easier said than done,” said the voiceover, followed by the customary title letting us know how many hours earlier the episode was jumping back. It’s usually in the double figures, 15, say, or 17; this episode was tight, and just took us back 5 hours. That immediately upped the pressure and the stakes, and in fact we reached Sammy’s off duty shooter moment in the middle of Act One. 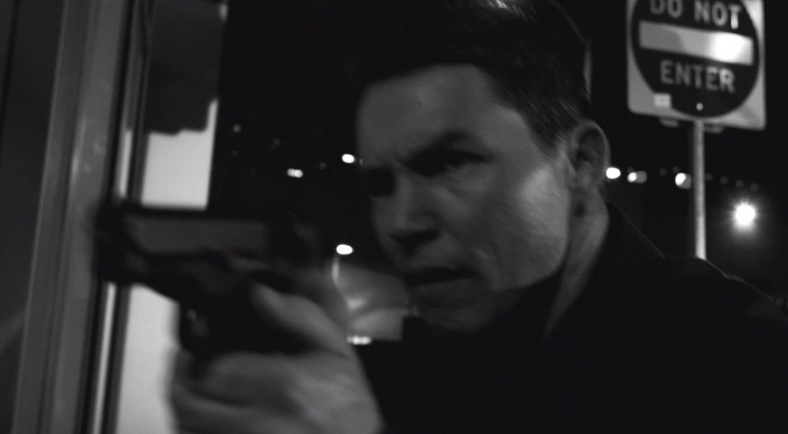 Sammy’s takedown of a huge, topless guy shooting at cars and taking a hostage set up a nice contrast to Sherman’s “poster boy” arc; “Come on,” Sherman tells Bryant shortly afterwards, “don’t tell me you didn’t love every minute playing bad-ass for those cameras.” Hatosy’s answering smile was pure gold; hell yeah he liked it. It was a nice character moment for these two, whose relationship has often been spiky and fraught. The continuing saga of Tammy’s assault charges against Sammy further bolstered the Sherman/Hatosy friendship, with Sherman unequivocally letting Bryant know he’s got his back. 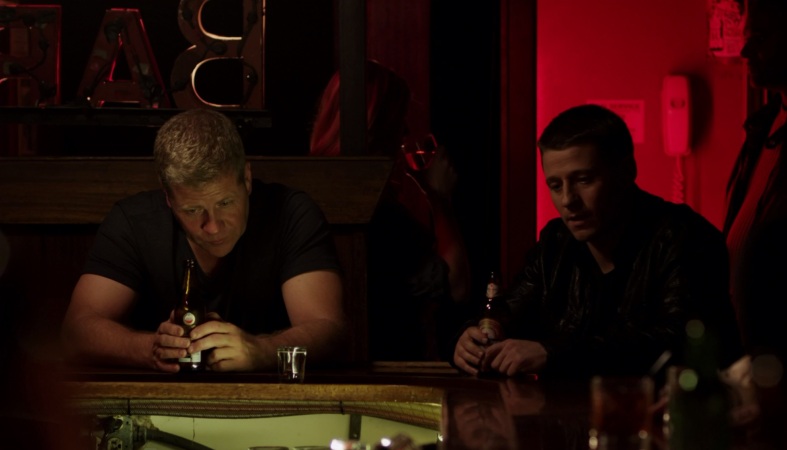 You can never go back

Only the writers know why, but the decision has been made to keep these two as icy and fractured as possible. It’s rough, given the emotional history that they have; the show was born from their TO/new boot relationship, and one of its biggest emotional payoffs was Sherman saving Cooper’s life by getting him to rehab. Since then, in two seasons, their only contact has been an awkward nod partway through season four, and the excruciating and heartbreaking conversation in this episode, which started awkwardly, ended abruptly, and played out with Sherman and Cooper at opposite ends of the bar, ignoring each other for the rest of the night (until Sherman got his booty call). It’s good drama, but it’s f**king annoying too. There’s surely a lot of mileage to had be had from playing the two of them off each other in a more sustained way as Sherman develops his true cop style while Cooper winds his down. Still, SouthLAnd thrives on moving forward relentlessly, and I wouldn’t have it any other way. It’s sad that their bond is broken, but that’s the world of the show; things get broken, and you move on.

Whedon’s script played all of this to perfection though, along with Cooper’s increasing conflict at the prospect of possibly leaving the force, and in contrast to his short friendship with Ben, his deep, everlasting history and friendship with Dewey. Whedon did a great job with all their scenes, and gave Dewey all the best lines — Tommy Howell nailed every last one of of them in what was a bravura episode for him.

Cooper wasn’t the only one that Sherman wasn’t showing the love to. That booty call he followed up on wasn’t from Brooke, who he called his girlfriend for the first time at the start of the episode; it was from a girl he met on patrol.

Sherman’s “oh shit I just called her my girlfriend” face

So giving a girl your card so she can call if she needs to is definitely #1 in the Sherman playbook. I hope they play this out; Annie Monroe, formerly of the pop-punk LA girl band The Like, has been a great addition to the cast, always making the most of her brief screen time with naturalistic charm and enviable snark.

But you know we have to talk about Regina.

Off-Duty was directed by the incredible Regina King, her first time behind the camera on SouthLAnd. And it wasn’t like they gave her an easy one to help her out of the gate. No way. This was a brutal script to shoot: multiple tense and complicated action sequences, so many high stakes and key to the series emotional and character scenes, and some really huge moments for Lydia to act. King was a phenomenal director.

With formidable DP extraordinaire Dana Gonzales at her side, she gave us one of the most kinetic, emotional and visceral episodes to date. The action sequences had a hyper-vivid quality, the locations perfectly backdropped the emotional arcs; the whole thing was as emotional as her performances usually are, and in the same way — subtle but devastating.

All in all, this was one of SouthLAnd‘s strongest ever episodes, a great debut on the show for Whedon as writer and King as director. Their pairing produced TV gold. This show knows exactly how to move fast and stay alive. It’s thrilling.

How to be awesome